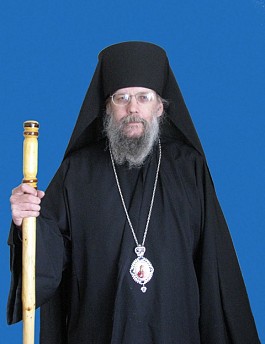 Archbishop Alexander (Golitzin) was born in Burbank, CA in 1948 and raised attending Saint Innocent Church, Tarzana, CA.  He received a Bachelor of Arts degree in English from the University of California at Berkeley and a Master of Divinity degree from Saint Vladimir’s Seminary.  He spent seven years pursuing doctoral studies at Oxford University in England under His Eminence, Metropolitan Kallistos [Ware].  During this time, he also spent two years in Greece, including one year at Simonos Petras Monastery on Mount Athos.

After receiving his D.Phil. in 1980, Archbishop Alexander returned to the US.  He was ordained to the diaconate in January 1982 and to the priesthood two years later.  In 1986, he was tonsured to monastic orders.  He served OCA missions in northern California and headed the Diocese of the West’s mission committee.

​In June 2010, the Bulgarian Diocese initiated a search for a candidate to succeed His Eminence, Archbishop Kirill who reposed in the Lord in 2007.  “Of the 22 possible candidates reviewed in the first phase of the search, after an intensive review process, two candidates were presented to the diocese’s Fifth Congress-Sobor in June 2011,” noted the diocesan Consecration Committee Chair, Archpriest Andrew Jarmus.  “Bishop Alexander was the candidate elected by the Congress-Sobor’s clergy and lay delegates.”

In October 2011, the members of the OCA’s Holy Synod of Bishops elected Archimandrite Alexander Bishop of Toledo and the Bulgarian Diocese.

On Saturday, May 5, 2012, he was consecrated Bishop of Toledo and the Bulgarian Diocese during a Hierarchical Divine Liturgy at Saint George Orthodox Cathedral in Rossford, OH.

On March 30, 2016, Bishop Alexander was elected Bishop of Dallas, the South and the Bulgarian Diocese.

During the 2017 Spring Session of the Holy Synod, he was elevated to the rank of Archbishop.

"Force Your Mind to Descend into the Heart": Some Resemblances between Byzantine Hesychasm and Merkavah Mysticism.”

Liturgy and Mysticism: The Experience of God in Eastern Orthodox Christianity

Liturgy and Mysticism: The Experience of God in Eastern Orthodox Christianity Part 2

The Place of the Presence of God: Aphrahat of Persia's Portrait of the Christian Holy Man.

"Many Lamps are Lightened from the One": Paradigms of the Transformational Vision in Macarian Homilies

A Testimony to Christianity as Transfiguration: The Macarian Homilies and Orthodox Spirituality

"Suddenly", Christ: The Place of Negative Theology in the Mystagogy of Dionysius Areopagites

Revisiting the 'Sudden': Epistle III in the Corpus Dionysiacum

Dionysius Areopagites in the Works of Saint Gregory Palamas: On the Question of a "Christological Corrective" and Related Matters

The Image and Glory of God in Jacob of Serug's Homily, "On That Chariot That Ezekiel The Prophet Saw"

"The Demons suggest an Illusion of God's Glory in a Form"

Making the Inside like the Outside: Toward a Monastic Sitz im Leben for the Syriac Apocalypse of Daniel

Adam, Eve, and Seth: Pneumatological Reflections on an Unusual Image in Gregory of Nazianzus's

"A Contemplative and a Liturgist": Father George Florovsky on the Corpus Dionysiacum Part 1

"A Contemplative and a Liturgist": Father George Florovsky on the Corpus Dionysiacum Part 2

Scriptural Images of the Church: An Eastern Orthodox Reflection